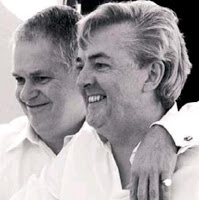 JMG readers Vivian Cummins and Erney Breytenback write to let us know that their December wedding in South Africa is the first same-sex union ever to be noted in the wedding announcements section of the Irish Times. Published on Saturday:

Vivian Cummings and Erney Breytenbach were married at their holiday home in Hermanus, South Africa, by the Reverend Pieter Oberholzer, on December 12th. As they spend every alternate Christmas there, they decided to avail of its climate for their big day. The major determining factor, however, was the fact that they could get married in South Africa, which is not possible for them, as two men, in Ireland. [snip]

Vivian and Erney met on Easter Saturday 1996 in Dublin, while Erney was visiting a colleague in the South African Embassy in Dublin. While there was an initial attraction, Vivian, in particular, did not want to pursue a long-distance relationship having just recently returned to live in Ireland. However, after travelling to Oslo for Erney’s 40th birthday party, they decided to make a future together and Erney took early retirement and moved to Ireland. Vivian and Erney’s witnesses for their marriage were their respective sisters, Orla Fanagan and Sarina Joubert. Their wedding photographs were taken by a friend, Anne-Marie Delaney from Timahoe, Co Laois, who now lives in Cape Town. The ceremony was followed by luncheon on the terrace of their house, bedecked with a free-form canvas tent erected for the day to shield their families and friends from the sun. Erney’s nieces prepared the table decorations using indigenous South African flowers. Vivian and Erney will continue to live and work from their home in a converted lock house on the Grand Canal on the Kildare/Laois border.

Previous AT&T: We’re Not There Yet In NYC
Next Today In Mildly Interesting Trivia