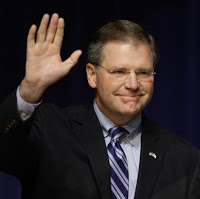 Illinois is one of the dwindling number of states without a constitutional ban on same-sex marriage. If GOP gubernatorial candidate Bill Brady gets elected, he plans to correct that.

The GOP gubernatorial front-runner Wednesday proposed changing the state Constitution to ban same-sex marriages, make it more difficult to pass state tax increases, impose term limits on lawmakers and overhaul the process of redrawing legislative boundaries. “I’m trying to give the government back to the people,” said Sen. Bill Brady (R-Bloomington), when asked what the package says about him as a candidate for governor. The same-sex marriage prohibition would prohibit gay marriages and civil unions.

Gov. Pat Quinn, the guy who replaced Rod Blagojevitch, is the Democratic nominee.