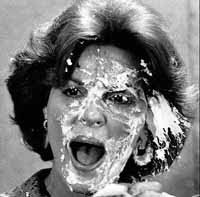 HBO is developing a biopic about the life of Anita Bryant, the infamous beauty queen and orange juice spokesperson who successfully spearheaded the 1977 campaign to overturn Miami-Dade county’s new gay rights law.

“Sex and the City” creator Darren Star is on board to direct the film, which is being written by “Runaway” creator Chad Hodge. Star also is executive producing with Dennis Erdman. “She is a fascinating person on every single level,” said Hodge, who has a connection to Bryant — they both attended Northwestern. “The twists and turns of her life are incredible.” By age 18, Bryant, who was born to a religious Oklahoma family in 1940, had won Arthur Godfrey’s talent show and a Miss Oklahoma pageant and finished as second runner-up for Miss America. In 1959 and ’60, she was a major pop star with three million-selling records. After marrying and settling in Florida, she reverted to Christian music and, projecting a wholesome image, began plugging such blue-chip companies as Coca-Cola, Kraft Foods and Holiday Inn. Her most famous celebrity endorsement gig was for the Florida Citrus Commission, for which she sang in a series of TV commercials, closing each ad with the tag line, “A day without orange juice is like a day without sunshine.” By the mid-’70s, Bryant was a Christian celebrity. She published several best-selling books and won Good Housekeeping’s “Most Admired Woman in America” poll for three consecutive years.

They should totally cast Delta Burke as Anita.