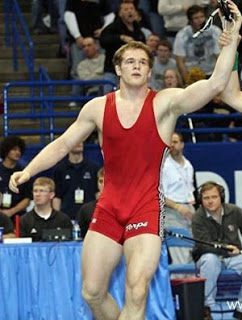 Nationally ranked college wrestler Hudson Taylor is a passionate advocate for LGBT rights, to the point where he even competed with the HRC logo on his headgear. Via Outsports:

When Hudson Taylor proposed to Lia Alexandra Mandaglio, it was fitting that it was the same night they saw the movie “Milk.” The story about a pioneering gay rights advocate meant a lot to the couple. Back at Mandaglio’s condominium in Washington DC, Taylor, a University of Maryland wrestler, presented her with a signed edition of Martin Luther King’s book “Why We Can’t Wait.” She didn’t wait, and said yes. They will be married on Sept. 24, 2011. Taylor proposed to Lia Alexandra Mandaglio the same night they saw “Milk.” “The proposal is a big event not to be taken lightly,” Taylor said. “We’re both very progressive and very outspoken in LGBT and feminist issues.” The book “symbolized how we felt and how we would act,” and was “very fitting for the engagement.” Being outspoken and passionate is nothing new for Taylor, 36-2 this season and ranked No. 3 in the country in the 197-pound NCAA wrestling weight class. In addition to being a champion wrestler, he is an academic All American with his eye on law school and a possible future political career.