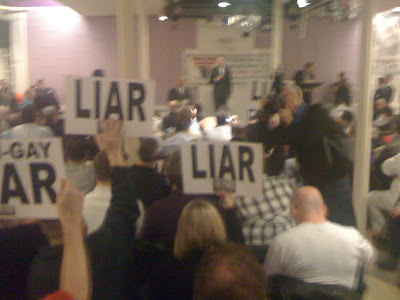 Former Rep. Harold Ford (D-TN), who is considering running against Sen. Kirsten Gillibrand, had to cut his appearance at the NYC LGBT Center short last night when protesters in the audience repeatedly interrupted his speech. Via Gay City News:

Some in the crowd were unabashed Gillibrand partisans and carried anti-Ford messages written on the back of “Gillibrand For Senate” signs. Jeffrey LeFrancois, a community liaison for Assemblyman Richard Gottfried, a Democrat who represents Chelsea, said, “Absolutely not” when asked if he could support Ford. Gottfried has endorsed Gillibrand. Dan Choi, an Army reservist and Iraq War veteran who is facing discharge after he came out on national television, described Gillibrand as a “fierce advocate” for the gay community when he stood to ask what Ford’s position was on the military’s Don’t Ask, Don’t Tell policy. Ford said, “I’m for repeal of the policy. I’ve never been for it.” Ford also asked of Choi that “You give me the same opportunity she has had” to demonstrate her support for the gay community. Choi replied, “That would require you to fire her and to fire me.”

While some yelled out “Let him talk” or “Let him speak” when Ford was interrupted by chants or catcalls, it did seem as if the room was divided between those who opposed him but were willing to listen, and those who opposed him and wanted to shout him down. At the end of the event, Ford was briefly startled when one audience member charged the front of the room and set off a confetti-filled popper that sounded like a gunshot in the crowded room. Asked after the event if he thought he had any supporters in the room, Ford said, “I’m not sure. If I decide to run I hope to come back.”

While I’m no fan of a carpetbagger like Rep. Ford, I don’t see the point of disrupting an ostensibly friendly speech on our own turf. Ford was the invited guest of the Stonewall Democrats. David Badash at New Civil Rights Movement called the protesters no better than teabaggers:

Harold Ford’s reception tonight at New York City’s LGBT Center, which hosted the Stonewall Democrats’ event at which Ford was invited to speak about his stance on issues affecting the LGBTQ community, was little short of a mob scene. Protesters, organized by “The Power,” an LGBTQ advocacy group that has worked tirelessly — albeit with tactics at times well-intentioned yet ill-advised – to further the civil rights cause for all LGBTQ Americans, turned this event into Tea Party style politics.