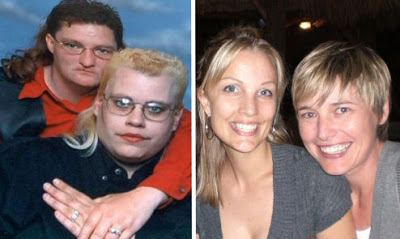 In a deliberate attempt to ridicule a lesbian couple involved in an adoption case, the Florida Family Policy Council used the above-left photo in press materials about the case. The actual couple is on the right. My source tips me that the left photo is the first result one gets when doing a Google search for “ugly lesbians.” Via the Orlando Sentinel’s excellent Scott Maxwell:

“Arrogant judicial activism” was how the finger-waggers at Orlando’s Florida Family Policy Council described the ruling in an alert it sent out to its members last week. And to make their point about just how frightening this ruling was, the Policy Council included a photograph of the couple — a strange and androgynous-looking duo, one with bleached skin and both with mullet haircuts. The couple look so odd (you literally can’t tell whether they are male or female) that one might wonder how any judge could place a young child with such a disturbing-looking duo. Except the judge didn’t.

The abnormal-looking couple that the Policy Council chose to illustrate this story is not the same couple granted the right to adopt the child. No, the two-woman couple awarded custody of the 1-year-old — South Florida trade-show executive Vanessa Alenier and her partner, Melanie Leon — look more like J.Crew models: all-American with catalogue clothes and smiles. The picture that the Policy Council chose was a grotesque caricature. These are the dirty tactics of Christianity’s far-right warriors. Not the majority of mainstream Christians, mind you. Not those who are focused on caring for their own families and practicing their own faith — but those who are obsessed with homosexuality. These extremists wage their campaigns of intolerance based on deception and misrepresentation. And they have the gall to do it in God’s name.

Deception, insults, and petty schoolyard taunts. It’s all they have.

Previous 10″ Will Stop The Trains
Next Fox-Worthy