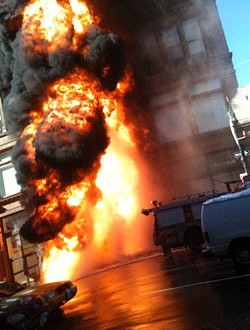 An explosion in Chelsea has blown out the windows of a seven story building and destroyed a ground floor Radio Shack.

Firefighters are on the scene of an explosion on 6th Avenue and 20th Streets in Manhattan’s Flatiron District. The front of a Radio Shack store at 641 6th Avenue was smoldering in the aftermath. There was damage to several floors above the store. A Bally’s Total Fitness and an Apex Technical School location and a Papyrus stationary store was also damaged in the blast. The explosion happened at about 11:30 a.m. in what is normally a busy area. According to witnesses, a massive ball of flames could be seen shooting up from a manhole in front of the building. Fire department officials say the explosion sparked a transformer fire. Sixth Avenue is closed between 14th and 20th Streets. The following bus lines are diverted through the area: M5, M6 and M7. Firefighters were going floor-to-floor in the building. Windows on all seven floors of the building were blown out.

No injuries have yet been reported. The source of the explosion in unknown, but may be related to an underground steam pipe.