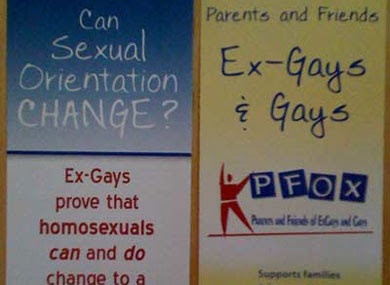 Due to a 2006 lawsuit, some Maryland high schools have been forced to allow the distribution of “ex-gay” fliers by PFOX.

Some Montgomery County high schools passed out fliers this week from an organization that contends gays can become heterosexual through therapy, and the schools say they cannot prevent the use of their distribution system by such groups. The fliers, from the group Parents and Friends of Ex-Gays and Gays, were distributed Thursday alongside report cards by teachers at Winston Churchill High School in Potomac. The group says it delivered them to about half the county’s high schools this week and plans to do the same at the remaining high schools at the end of the school year. The schools are required to distribute literature that isn’t deemed hate speech from any registered nonprofit organization four times a year, the result of a 2006 lawsuit, said Dana Tofig, a spokesman for the Montgomery County Public Schools. School officials said that while they aren’t always happy with everything that goes home with students, their hands are tied by the results of the litigation.

Telling perfectly normal children that they are mentally ill sure seems like hate speech to ME.