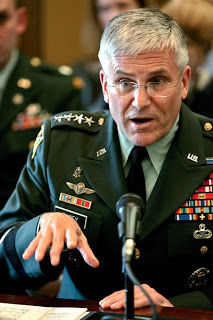 At today’s Congressional hearings on DADT, Army chief of staff Gen. George Casey expressed opposition to a temporary moratorium on dismissals until the repeal is sorted out.

The Army’s top uniformed officer said Tuesday that he has “serious concerns” about overturning a 17-year policy that bans gays from serving openly in the military and supports a yearlong study into the matter before any changes are made. The carefully crafted comments by Army Chief of Staff Gen. George Casey to the Senate Armed Services Committee indicate reluctance by some within the military’s senior ranks to President Barack Obama’s plan to repeal “don’t ask, don’t tell.” Obama says the policy is wrongheaded and should change. Defense Secretary Robert Gates agrees but wants to move slowly, and has tasked a lengthy assessment on how to lift the ban without affecting the force. Casey’s testimony as a service chief is considered crucial to the debate. As the top uniformed officials in each service, a service chief is in charge of recruitment and preparing troops for deployments. If the policy on gays is overturned, the chiefs would have to decide how to implement the changes.

Neither Gen. Casey nor Gen. Schwartz expressed opposition to the plan their bosses — Sec. Gates and Adm. Mullen — put before the committee earlier this month. We expect they will work within the framework the Pentagon has laid out. There will continue to be differences around the margins, but, at the end of the day, we expect the Chiefs will salute the commander in chief, Defense Secretary Robert Gates, and Chairman of the Joint Chiefs of Staff Admiral Mike Mullen.

Previous Jon Stewart On Glenn Beck’s At CPAC
Next Gingrich: Obama Is A Socialist