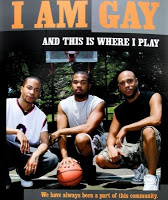 Sponsored by a Long Island-based LGBT group, an ad campaign against homophobia in the African-American community has been launched on the Long Island Rail Road. Via Newsday (subscription required):

In between ads for TV shows and clothes on the Long Island Rail Road is a different kind of message. These ads feature pictures of young African-American men with their families, at church and on the basketball court. At the top of each poster are the words, “I am gay.” The Bay Shore-based Long Island GLBT Services Network sponsored the ads with a $37,000 grant from the state health department. David Kilmnick, chief executive of the group, said he hopes the ads will start a conversation within black communities about homosexuality and homophobia. “This is the first time there’s this visible of a campaign and so widespread across the entire Island,” he said. “It’s in your face in a positive way. . . . It’s talking about ‘We’re gay and this is our home and this is our community.’ ” Dale Anthony Edmonston, an African-American AIDS activist from Hempstead, said homophobia in the black community has had disastrous results for black Long Islanders who are gay. “In the African-American community, it’s taboo to talk about gays and lesbians,” he said. “Many members of the African-American community have family members who are gay and lesbian. And it’s not discussed and they can’t say nothing in their family and so they go outside of the box to find the happiness and support that they think that they need, which is allowing a lot of people to put themselves at risk.”

“There’s no movement to single out homosexuals” in the black community, Tuggle said, adding that if homosexuality is discussed, it’s usually in a teasing way. Gays are not a topic of discussion in many black churches, he said – especially since other issues, such as unemployment and criminal justice, are more relevant. “People who are gay come in all races,” Tuggle said. “And homophobia exists in every community. To say that only black people don’t like black people who are gay, that’s silly. That’s reprehensible.”