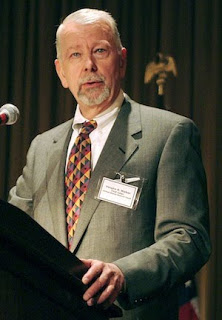 Today the San Francisco Chronicle outed Perry vs Schwarzenegger Judge Vaughn Walker. While Walker’s gayness has long been known by insiders, this is the first acknowledgment by the press.

The biggest open secret in the landmark trial over same-sex marriage being heard in San Francisco is that the federal judge who will decide the case, Chief U.S. District Judge Vaughn Walker, is himself gay. Many gay politicians in San Francisco and lawyers who have had dealings with Walker say the 65-year-old jurist, appointed to the bench by President George H.W. Bush in 1989, has never taken pains to disguise – or advertise – his orientation.

They also don’t believe it will influence how he rules on the case he’s now hearing – whether Proposition 8, the 2008 ballot measure approved by state voters to ban same-sex marriage, unconstitutionally discriminates against gays and lesbians. “There is nothing about Walker as a judge to indicate that his sexual orientation, other than being an interesting factor, will in any way bias his view,” said Kate Kendell, head of the National Center for Lesbian Rights, which is supporting the lawsuit to overturn Prop. 8. As evidence, she cites the judge’s conservative – albeit libertarian – reputation, and says, “There wasn’t anyone who thought (overturning Prop. 8) was a cakewalk given his sexual orientation.”

The lead counsel for Protect Marriage says that his side does not intend to make an issue of Walker’s sexuality should he rule against them. Riiiight. Walker hasn’t necessarily been considered a friend of the gays. In 1987 he defended the U.S. Olympic Committee in its copyright lawsuit against Tom Waddell, the creator of the Gay Olympics who was dying of AIDS. Even after winning the case, Walker had a lien placed against Waddell’s home in order to recoup the USOC’s legal costs. Only after Waddell died was the lien lifted. The Gay Olympics case delayed Ronald Reagan’s nomination of Walker to the federal bench.

UPDATE: The far-right National Review is already calling for Walker to step down. The linked editorial cites Walker’s attempt to have the trial televised, then closes with this:

Take Walker’s failure to decide the case, one way or the other (as other courts have done in similar cases), as a matter of law and his concocting of supposed factual issues to be decided at trial. Take the incredibly intrusive discovery, grossly underprotective of First Amendment associational rights, that Walker authorized into the internal communications of the Prop 8 sponsors—a ruling overturned, in part, by an extraordinary writ of mandamus issued by a Ninth Circuit panel consisting entirely of Clinton appointees. Take Walker’s insane and unworkable inquiry into the subjective motivations of the more than seven million Californians who voted in support of Prop 8. Take Walker’s permitting a parade of anti-Prop 8 witnesses at trial who gave lengthy testimony that had no conceivable bearing on any factual or legal issues in dispute but who provided useful theater for the anti-Prop 8 cause. And so on. Walker’s entire course of conduct has only one sensible explanation: that Walker is hellbent to use the case to advance the cause of same-sex marriage. Given his manifest inability to be impartial, Walker should have recused himself from the beginning, and he remains obligated to do so now.