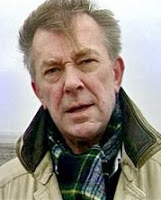 BBC announcer Ray Gosling has been arrested for murder for the mercy killing of his AIDS-stricken partner.

TV presenter Ray Gosling has been arrested on suspicion of murder by Nottinghamshire Police after he admitted killing his lover. The 70-year-old’s confession that he had smothered the unnamed man who was dying of Aids was broadcast on the BBC’s Inside Out programme on Monday. The Nottingham filmmaker said he had made a pact with his lover to act if his suffering increased. Police are questioning the presenter over his claims. A police spokesman said: “A 70-year-old Nottingham man was arrested earlier on suspicion of murder following comments made on the BBC’s Inside Out programme on Monday evening.” Mr Gosling has previously said he would not name his lover or say when the incident took place. In the BBC East Midlands programme, broadcast on Monday, he told how he smothered the man with a pillow while he was in hospital after doctors told him that there was nothing further that could be done for him.

Assisted suicide is illegal in the UK, but the criminal code provides guidelines for judging when cases should be prosecuted.