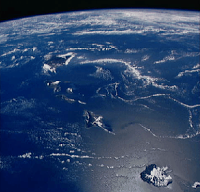 After nonstop harassment by Catholic and evangelical groups protesting at the state capitol building, last week the Hawaii House indefinitely postponed a vote on civil unions after approving such an item twice in previous years. The ACLU and Lambda Legal are suing the state.

Lambda Legal and the American Civil Liberties Union of Hawai`i Foundation (ACLU) today announced they are planning legal action against the state of Hawai’i following last Friday’s failure by the Hawai`i Legislature to enact a law providing broad legal rights and duties to the state’s lesbian and gay couples. The Hawai`i Senate had approved H.B. 444 — a bill to create “civil unions” — by a veto-proof 18 to 7 majority the week before, sending the bill back to the House for a conforming vote. Although the House had passed H.B. 444 by an emphatic 33 to 17 margin last year, House members used an anonymous voice vote to kill the bill last Friday. “Enough is enough. Infinite patience in the face of discrimination is irresponsible,” said Jennifer C. Pizer, Marriage Project Director for Lambda Legal. “Our clients suffer every day from unfair taxes and denial of basic legal protections that every family in Hawai`i needs. Although same-sex couples can’t hope today for the full equality of marriage, Hawai`i’s constitution still guarantees equal rights and responsibilities to everyone, gay and heterosexual alike. Because the Legislature has ducked its responsibility multiple sessions in a row, we have no choice now but to bring our clients’ legal claims to court.”