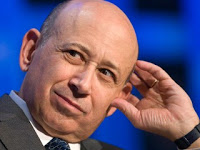 Goldman Sachs, favorite whipping boy of the teabaggers (and just about everybody else), is said to be considering a bonus for its CEO Lloyd Blankfein that may reach $100M.

Goldman Sachs, the world’s richest investment bank, is facing a potential political storm over how much it pays its chief executive, Lloyd Blankfein. Bankers in Davos for the World Economic Forum (WEF) told The Times they understood that Mr Blankfein and other top Goldman bankers outside Britain were set to receive some of the bank’s biggest-ever payouts, in defiance of President Obama’s attempt to shame banks into cutting bonuses. “This is Lloyd thumbing his nose at Obama,” said a banker at one of Goldman’s rivals. Mr Blankfein took home his biggest bonus so far in 2007, when he was paid $67.9 million. Goldman’s profits last year were $1.8 billion higher than in 2007. This leaves the bank with a justification to pay him even more although payouts will be made in shares rather than cash to make them more politically palatable. Some rival bankers claim Mr Blankfein could receive up to $100 million, though even a much lower figure could prove politically explosive.

Goldman Sachs was one of the first banks to pay back its bailout money.