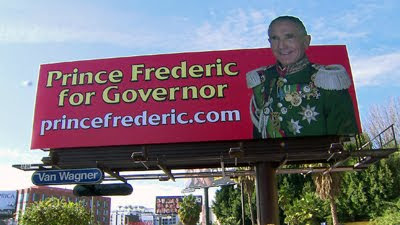 Well, this will certainly spice things up.

Prince Frederic Von Anhalt, 67, whose platform is “Return to the Good Life in California” unveilled a billboard on Sunset Boulevard at 11:00 a.m. He released the following statement: “When I came to California 26 years ago we had the ‘Good Life.’ We were prosperous; people had jobs, affordable homes and money to spend. The economy was great. I loved the state so much that I decided to make my home here, marry and become a citizen. About 10 years ago things started to deteriorate, and last year when the state was at its worst I decided I had to try and make a difference. I decided to enter the political realm and get California back on the right track. So today I am announcing that I plan to run for Governor of California! We’ve had Irish-American, African-American, Armenian-American, and Austrian-American Governors and now it’s time for a German-American to lead the state.”

Prince Mr. Zsa Zsa wants an open border with Mexico, legalized marijuana, and the overturn of Prop 8. He’s believes marriage “can only be between a man and woman” but says Prop 8 is unconstitutional and that gays have the right “to be as miserable as the rest of us.” Ollllld joke. Here’s his site.

Previous Joy Behar: Gays Don’t Care About Monogamy Like Straights Do
Next Whip It, Whip It Good