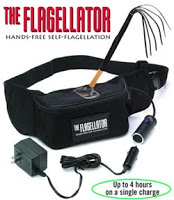 Whip It, Whip It Good A new biography of Pope John Paul II reveals that he used to get into some serious self-whipping. Kinky!

In the book, Oder wrote that John Paul frequently denied himself food — especially during the holy season of Lent — and “frequently spent the night on the bare floor,” messing up his bed in the morning so he wouldn’t draw attention to his act of penitence. “But it wasn’t limited to this. As some members of his close entourage in Poland and in the Vatican were able to hear with their own ears, John Paul flagellated himself. In his armoire, amid all the vestments and hanging on a hanger, was a belt which he used as a whip and which he always brought to Castel Gandolfo,” the papal retreat where John Paul vacationed each summer. While there had long been rumors that John Paul practiced self-mortification, the book provides the first confirmation and concludes John Paul did so as an example of his faith.