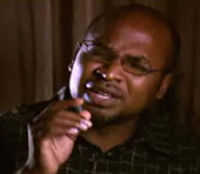 Box Turtle Bulletin reports that Uganda MP David “Kill Gays” Behati has been disinvited from next month’s National Prayer Breakfast, where President Obama is scheduled to speak. Via Advocate:

Ambassador Richard Swett, a spokesman for the breakfast, confirmed that Bahati was no longer allowed to come to the event, scheduled for February 4. He added, “The National Prayer Breakfast is an organization that builds bridges of understanding between all peoples, religions and beliefs and has never advocated the sentiments expressed in Mr. Bahati’s legislation.” Early reports from the Monitor newspaper in Uganda said that Bahati had planned to go to the even, and make a speech. The organization that puts on the National Prayer Breakfast is the Fellowship Foundation, also known as the Family, an evangelical Christian group linked to the development of the “kill the gays” bill.