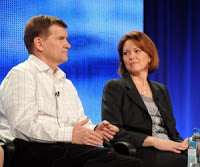 Ted Haggard: I Am Cured Of The Gay Ted Haggard and his wife appeared on Oprah’s tribute show to cheated upon wives yesterday. According to Ted, he now lets his wife check in on his whereabouts via Facebook and Twitter so that she always knows he doesn’t have a cock in his mouth. Because you can only use the internet in the presence of heterosexuals.

Former New Life Church Pastor Ted Haggard, who lost his Colorado Springs church and leadership status in the evangelical Christian community in 2006 after revelations of a relationship with a male prostitute, told “The Oprah Winfrey Show” on Tuesday that he is rebuilding trust in his marriage by being “super accountable.” Haggard said he regularly checks in with his wife, Gayle, and reveals his whereabouts on Facebook and Twitter. If he’s out of town without her, he said, he stays with a pastor rather than at a hotel. Haggard said he no longer has homosexual compulsions but has “stepped up” to do this so his wife won’t suffer any fear or anxiety about the future. Gayle Haggard’s book, “Why I Stayed,” was widely available Tuesday in bookstores. She told Winfrey they now have a stronger, better, more intimate marriage. “I love him more now after we’ve walked through all these difficulties together,” Gayle Haggard said.

Just for fun, here’s a rerun of Roy Zimmerman’s 2007 classic.