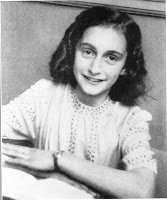 A school system in Virginia has pulled a revised version of The Diary Of Anne Frank after a Christian parent complained about the book’s inclusion of previously redacted bits about homosexuality.

Culpeper County public school officials have decided to stop assigning a version of Anne Frank’s diary, one of the most enduring symbols of the atrocities of the Nazi regime, after a parent complained that the book includes sexually explicit material and homosexual themes. “The Diary of a Young Girl: the Definitive Edition,” which was published on the 50th anniversary of Frank’s death in a concentration camp, will not be used in the future, said James Allen, director of instruction for the 7,600-student system. The school system did not follow its own policy for handling complaints about instructional materials, Allen said.

Anne Frank is in hell, you know, since she died a Jeebus-less Jew.