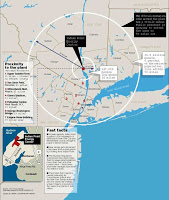 Indian Point’s unit 2 nuclear power plant automatically shut down Monday afternoon at about 4 p.m., due to a problem with its main electrical generator, Entergy officials said. There was no threat to the safety of workers or the public. Plant equipment performed as designed during the shutdown. The exact cause of the shutdown is being reviewed. As of late Monday, Entergy was working to better understand the underlying cause(s) of the generator trip. There was work being conducted by maintenance personnel associated with the generator exciter system at the time of the trip. NRC resident inspectors responded to the control room and continue to follow the event. Preliminarily, operator actions in response to the generator trip and subsequent plant shutdown appear appropriate and in accordance with operating procedures, the NRC said.

The shutdown in November resulted in 600,000 gallons of radioactive steam being released over the Hudson Valley. Which they totally meant to do. And which was completely safe, according to officials.