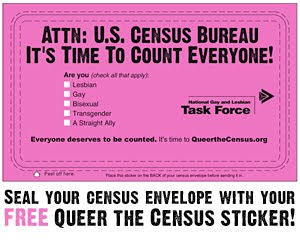 Since 1990, gay and lesbian couples have been provided an unintentional outlet to categorize their relationship, by self-identifying as married or unmarried partners. Even though the results aren’t officially reported, the raw numbers reveal that 145,000 same-sex couples identified as married or “unmarried partners” in 1990 (before any legal recognition in the U.S. even existed) and close to 600,000 same-sex couples self-reported in 2000. The Obama administration has reversed a Bush-era policy, so in the 2010 Census, a report will be released that outlines official information about same-sex couples. Here are some quick instructions on how to make sure your family is reported correctly.

What Box Do You Check?
If you are in a relationship and you live together, you have two choices. First, one of you will be designated as “Person 1.” If there is no clear favorite for who should be the head of household, perhaps you could flip a coin, wrestle for it or hold a lip-synching competition. Whoever doesn’t win will be designated as “Person 2.” This person is asked how they are related to Person 1. There are 16 choices, but the two that concern you are “husband or wife” and “unmarried partner.”

For more information on how to fill out the 2010 Census and how to order a free Queer The Census sticker for your packet, please click here.

Previous NYT Finally Weighs In On Uganda
Next Decaying Detroit