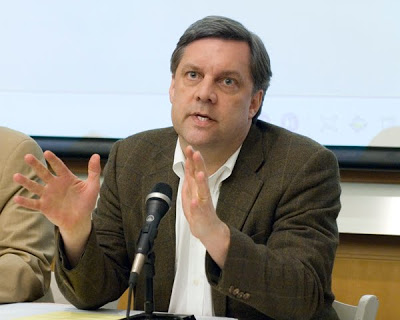 The haters’ final witness in Perry vs. Schwarzenegger yesterday was David Blankenhorn, the founder and president of the Institute for American Values, which bills itself as “devoted to contributing intellectually to the renewal of marriage and family life and the sources of competence, character, and citizenship in the United States.”

By most accounts, Blankenhorn was a disastrous “expert witness” for the defense whose credentials were eviscerated by David Boies. Judge Vaughn Walker even suggested that Blankenhorn’s status as an expert witness fell short of the Supreme Court’s guideline that such witnesses possess “specialized skills as opposed to the insights of an intelligent layperson.” At one point, Boies pointed to a quote from Blankenhorn’s 2007 book which seemingly contradicted his entire reason for being there: “We would be more American on the day we permitted same-sex marriage than we were on the day before.”

Boies went after Blankenhorn’s credibility immediately, noting that he apparently had only one peer-reviewed article to his credit and that was a thesis on a labor dispute between cabinetmaker unions in Britain. Although Blankenhorn was being offered as an expert witness on how same-sex marriages are detrimental to heterosexual marriages and children, Boies noted that Blankenhorn’s education had been in history. “You’ve never taught a course in college,” said Boies, “and you have no degree in psychology, psychiatry, sociology, anthropology.…” “No,” said Blankenhorn, interrupting. “And in preparation for this testimony, did you undertake any scientific study of what effects permitting same-sex marriages have been in any jurisdiction where same-sex marriages have been permitted?” asked Boies. “No,” said Blankenhorn.

At least a dozen times in the testimony, Mr. Blankenhorn refused to answer Mr. Boies when the lawyer posed a question and asked him to answer with a straightforward “Yes, no, or I don’t know.” Mr. Blankenhorn would say that there was no way to answer without extended clarification — even after Judge Walker instructed him to respond on several occasions. During a typical exchange, Mr. Boies asked the witness if any of the scholars he has relied on had “asserted that allowing same sex marriage would lower the rate of heterosexual marriage.” Mr. Blankenhorn replied that the “safest answer is I don’t know,” before adding, “But I believe the answer is that some of them have.” Mr. Boies then asked Mr. Blankenhorn to name the scholars, but the witness refused. As the questioning devolved into bickering, Judge Walker put both hands in the air to stop the pair. “Don’t argue with each other,” he said wearily, pointing to Mr. Boies and then to Mr. Blankenhorn. “Just ask a question and give an answer.”

The defense may rest its case today. Judge Walker has indicated that he will then take a few weeks to review the evidence before calling both sides back to make their closing arguments.

Previous Canada Shaves Its Beaver
Next Rep. Alan Grayson To Christian Right:
What About YOUR Pact With Satan?