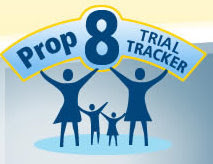 On their Prop 8 Trial Tracker blog, the Courage Campaign has been using a parody version of Protect Marriage’s infamous stick-figure logo, replacing the male adult with another female. After screaming about it last week, Protect Marriage is now suing.

Following on the cease-and-desist letter ProtectMarriage.com sent us last week, the Prop 8 attorneys filed late yesterday in U.S. District Court a complaint and temporary restraining order asking a federal judge to order us to take our parody logo down. I guess we all know the answer to the question: Do they have a sense of humor or are they that offended by stick figures in dresses? (see background on this silly dispute here)

The Prop 8 attorneys have requested a temporary restraining order (TRO) prior to the full ruling. The case has been assigned to Judge Lawrence K. Karlton and we are currently waiting to hear back if he he has either granted the TRO, denied the TRO, or opted for a hearing about the TRO. Our MoFo attorneys (the short-hand name our lawyers at Morrison Foerster go by) worked the midnight oil to prepare an excellent Opposition statement filed before the court. Short version: No fricken’ way we are taking the logo down. As our lawyer said, our logo is a “sassy” parody of their logo.

UPDATE: The Courage Campaign is reporting on Twitter than the judge has ruled in their favor.