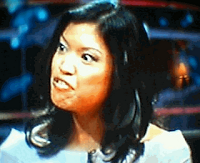 “They can talk and talk and talk without fear of retribution, intimidation, or physical violence. Meanwhile, Prop. 8 supporters and donors have been hounded, threatened, blacklisted, beaten, and forced to resign from their jobs for exercising their political free speech. Cindy and MEghan McCain’s silence on the continued thuggery of their anti-Prop. 8 duct-tape wielders speaks volumes.” – The relentlessly detestable Michelle Malkin, treading the familiar wingnut path of citing a handful of incidents to condemn tens of millions of Americans.