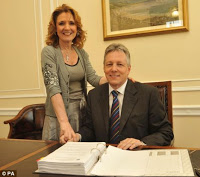 Northern Ireland First Minister Peter Robinson is stepping down for six weeks, the maximum time allowed, while he sorts out the sexual and financial scandal shrouding he and his wife. Last night Iris Robinson was admitted to a Belfast hospital for “acute psychiatric care.”

Mr Robinson has designated Enterprise Minister Arlene Foster to take charge in the interim. Earlier, the DUP’s full assembly team offered him their “wholehearted support” as he faced pressure to quit as NI First Minister. It follows a BBC Spotlight programme on his wife, Iris. On Monday, DUP deputy leader Nigel Dodds said Mr Robinson had the party’s “wholehearted support” and they wished him to remain as their leader. He was speaking as the first minister prepared to answer urgent questions at a special session of the NI Assembly. Under assembly rules, the first minister can step aside and designate a replacement for up to six weeks. After this, any changes must be referred back to the assembly for ratification.

Sinn Fein’s Gerry Adams: “This is not about the Robinsons’ private family matters. It is about implementing outstanding political agreements that are essential to good government and public confidence.”