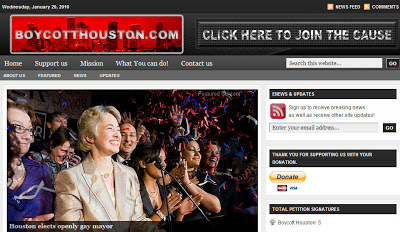 Pastor David Grisham has launched a website calling for the boycott of Houston because of its openly lesbian Mayor Annise Parker. Via Houston Press:

“The main reason for the boycott is simply because it’s about the only way that people in the rest of the state of Texas — outside of Houston — can actually take a stand for righteousness in the city of Houston,” Grisham tells Hair Balls. “Now, Jesus said that we were to preach the gospel through all the world, and that includes Houston, Texas.” This isn’t Grisham’s first anti-gay rodeo; he’s also behind www.repentamarillo.com, which also deals with the sin of gay people being all gay and doing really gay things. His group, a chapter of RAVEN Ministries International, also protested that city’s swingers’ club. (No, it wasn’t a gay swingers club, but swinging is apparently a sin, even if it’s the old-fashioned hetero kind. But they also preached during a gay pride event on a park….basically, wherever there are a bunch of gay dudes, you’re likely to find Grisham and his followers, which is in no way suggestive of anything at all). “This is not about the Mayor personally,” Grisham says, no doubt bringing some relief to Annise Parker. “It’s not about personality, it’s about principle. The election of an [openly] homosexual person to a major public office brings with it a radical homosexual agenda. That in and of itself makes a statement.”

Among the 20 things Grisham says not to do in Houston: work, shop, eat, vacation, drive, fly, invest, etc etc. Oh looky! Here’s his contact form. Slip the good reverend a couple of paragraphs of slash fiction involving him and, say, Peter LaBarbera.