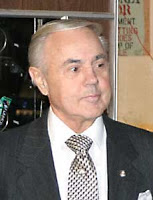 One Down, Seven To Go: NY Sen. George Onorato (D) To Retire NY Sen. George Onorato, one of the eight Democrats who voted against marriage equality, is retiring. Because the gays are coming after him!

State Sen. George Onorato, a veteran Queens Democrat, won’t seek reelection to the seat he has held since 1983, clearing the way for a run this fall by Assemblyman Michael Gianaris. At 82, Onorato is the Senate Democrats’ oldest member. His recent “no” vote on gay marriage made him vulnerable to a primary challenge, worrying party leaders who urged him to step aside, insiders said. Senate Democrats were anxious to prevent a primary between Onorato and Gianaris, but just as interested in harnessing the assemblyman’s prodigious fund-raising skills for their upcoming battle with the GOP for control of the chamber.

Previous Gay Good Samaritan Beaten On Chicago Subway, Pretends To Be Poz To Escape
Next Quote Of The Day – The Barefoot Bride