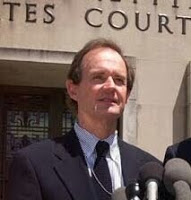 Perry vs. Schwarzenegger lawyer David Boies tells the Wall Street Journal today that his side will rest their case tomorrow.

“We’re pleased with the way it has gone,” said David Boies, an attorney for the gay couples who want to wed. He said he set out to prove that marriage was an important right, that gays were harmed by being denied that right and that marriage wouldn’t be hurt by extending it to same-sex couples. “We’ve proven all three of those,” he said. Judge Vaughn Walker will decide whether the 2008 voter initiative that limited marriage to a man and a woman codified discrimination or protected a legitimate state interest. This is the first federal challenge to state gay-marriage bans. Defense lawyer Andrew Pugno said his side would present evidence from experts that traditional definitions of marriage between heterosexual couples have special benefit for children and for society.

The bigots are expected to present a short defense as four of their six witnesses have withdrawn over claims that violent homosexuals will attack their families if they do.

Previous Osama: I Sent The Underwear Bomber
Next Exposing The Lies About Gay Pedophilia