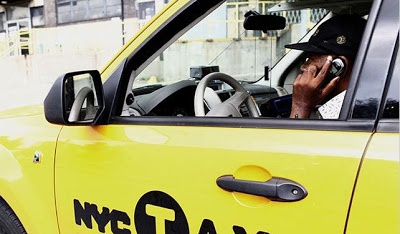 NYC launches its latest and strongest campaign against cell-chatting cab drivers today with a three strikes system that will cost a driver his his hack license upon the third violation.

Taxi and Limousine Commission agents and NYPD officers will be on the lookout for drivers using any electronic devices while not legally parked, including iPods, GPS devices and satellite radios. Officials are also hoping that riders will report any hack in violation by calling 311 or logging on to the TLC’s Web site and filing a report. “I’d report them,” said Emily McCollun, 23, from the Upper East Side. “They’re reckless drivers when they’re having a conversation on the phone, whether or not it’s hands-free.” Other passengers said they would take matters into their own hands. “Now I will ask the driver, ‘Why are you doing this, anyway? Why are you on the phone if you know the rules?’ ” said Mark Martin, who was catching a cab in the East Village yesterday. A series of new penalties will fine a driver $200 for each conviction and send him to a rules “refresher course.” After a second infraction, the hack’s license will be suspended, and after the third strike, revoked.

I can’t remember the last time I had a cabbie who wasn’t on his phone.