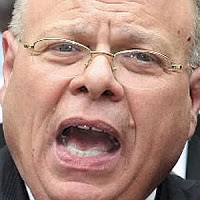 Anti-gay closet case NY Sen. Carl Kruger says local activist Allen Roskoff is a “bottom feeder” for saying that he’s gay. Which he’s not. Totally. No, really, he’s not. At all.

Brooklyn state Sen. Carl Kruger became the No. 1 target of gay activists when he voted against same-sex marriage last month. Now, his enemies are circulating photos taken of Kruger at a birthday fund-raiser last year, where cross-dressing entertainer Leonid the Magnificent performed hula-hoop tricks in a skintight cat suit. “For hating gay marriage so much, Kruger sure loves watching tight, Lycra-clad asses,” snarked Queerty.com. Gay activist Corey Johnson and Allen Roskoff, the openly gay president of the Jim Owles Liberal Democratic Club, have led demonstrations at Kruger’s home. Roskoff wrote on his blog, “People ask us how we know he is homosexual. My immediate response is, how does one know that Paul Lynde and Liberace were gay?” Kruger, who denies being gay, called Roskoff “a bottom feeder,” and said he was unfazed by the smear campaign. “It goes with the territory,” he told Page Six. “I have not changed my position.”