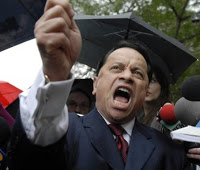 NY Attorney General Andrew Cuomo has filed court papers to force state Sen. Pedro Espada to comply with a five month old subpoena regarding his many, many violations of campaign election laws, non-profit rules, and state labor laws. You may remember Espada as one of last summer’s Gang Of Three that upended the state Senate over a leadership battle peripherally tied to a proposed vote on marriage equality.

Last summer Espada ditched the Democrats to become a Republican, only returning when he was promised the top job in the state Senate. Now he’s the Senate Majority Leader but a change in the rules means that’s no longer the top position. For years Espada has flouted election campaign laws, including the one requiring that he actually live in the district he represents. His “non-profit” Bronx health clinic appears to be nothing more than a way to employ Espada’s family and friends, with the added benefit of skimming a boatload of state money. Yesterday’s action by Andrew Cuomo is VERY long overdue.