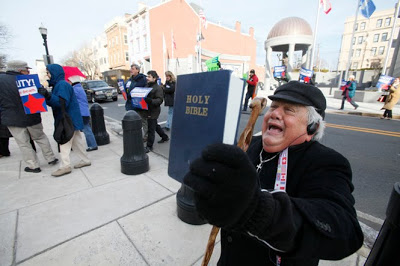 Marriage equality activists and Bible-waving opponents faced off outside the New Jersey state house yesterday as Garden State Equality made a last-minute pitch to convince to convince lawmakers to make a vote on marriage before session ends on January 11th. Governor-elect Chris Christie takes office on the 19th. But the state Assembly Judiciary Committee refused the effort. Garden State Equality head Steves Goldstein threatened to abandon support for the Democrats, saying, “Either we will be able to march up the aisle and have marriage equality, or we will march across the aisle and have political independence.”