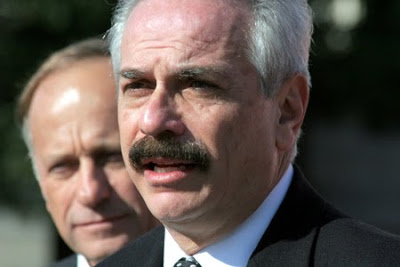 The Los Angeles Times yesterday published a lengthy profile of Joseph Farah, the founder and editor of World Net Daily, the most widely read wingnut site in the world.

Reporting from Washington and Virginia – Sipping coffee in a strip mall, Joseph Farah looks like something out of a spy novel — suave, mysterious, bushy black mustache. He’s surprisingly relaxed, considering he believes his life is in danger because of his occupation. He runs a must-read website for anyone who hates Barack Obama. Once a little-known Los Angeles newspaper editor, Farah has become a leading impresario of America’s disaffected right, serving up a mix of reporting and wild speculation to an audience eager to think the worst of the president.

“Minister: Obamacare kills African-American babies . . . Sign at homeless camp: Welcome to Obamaville,” the headlines holler at WorldNetDaily.com, an online tabloid thatrelentlessly skewers the administration and its every move. The topic it pursues with tireless zeal, though, is the claim that Obama was born not in Honolulu but in Africa, and is therefore ineligible to be president. Farah has used his widely followed website to launch an electronic petition demanding proof of Obama’s birthplace, a national billboard campaign (“WHERE’S THE BIRTH CERTIFICATE?”) and more than 400 articles suggesting America’s first black president might not be a “natural born” citizen. If Farah believes Obama is bad for the country, the president has been indisputably good for Farah’s business.

Farah claims his site enjoys four million unique visitors each month and is “on track” to gross $10M this year, a questionable figure largely derived from the site’s many ads touting get-rich-quick schemes, end times books, and quack medical treatments, not to mention Farah’s massive anti-Obama superstore which sells a panoply of birther-related items. Farah also makes big money renting his massive mailing list to the GOP and other right wing groups.