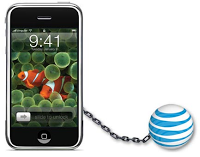 Business Insider reports that Apple will announce the end of its exclusivity deal with AT&T this week.

AT&T captivity is the single biggest reason foks who don’t buy iPhones don’t buy them, so this would be big. It would also be unexpectedly early–most analysts aren’t expecting Apple to open up to other carriers until the middle of the year. (We’d be surprised to see Apple actually end the exclusivity on Wednesday, but it seems plausible that they would announce the end…)

It’s believed that the end of the AT&T deal may be tied to the expected launch of the iTablet (or whatever it will be called.)

Previous Cougars On The Hunt
Next On Cyberbullying