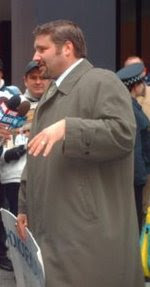 I Am A Sexual Anarchist In addition to being a terrorist, apparently I’m also a sexual anarchist, whatever that is. This, according to Liberty Counsel’s Matt Barber, who is continuing his campaign of excising JMG comments whenever he thinks they suit his Christofascist means. From his column about the public’s reaction to Fox News anchor Brit Hume calling on Tiger Woods to convert to Christianity:

While the mainstream media’s rage was clumsily managed (or masked), unbridled hate boiled over in the left-wing blogosphere. On the sexual anarchist site, “JoeMyGod,” poster “QScribe” suggested that Brit Hume’s deceased son had been “gay” and viciously accused Hume of being responsible for the young man’s suicide: “Brit Hume still hasn’t ‘repented’ for trashing his gay son and driving him to suicide. When I want moral guidance from a pig like that, I’ll be sure to ask. Until then, he really ought to STFU.” (Hume has publicly shared that his son’s heartbreaking suicide played a large role in his acceptance of Christ.) The next commenter went so far as to cruelly imply that Hume had sexually molested his own child and further mocked the tragic suicide, writing: “Dead victims don’t tell on their molesters.”

Seriously, what would a sexual anarchist do? I mean, it sounds kinda hot – I just wouldn’t know where to start. Barber, of course, is still steaming at us for “sabotaging” his recent book of republished online columns, for which JMG readers provided Amazon with scathing reviews and about 150 hilarious keywords.

Note To Matt Barber: Do you think you’ll be charged as a conspiracist to the illegal kidnapping of Isabella Jenkins? You’ve got no time to respond to multiple press inquiries about her whereabouts, but you’ve got time to read this here sexual anarchist website thingy? What are you afraid of Miss Barber?

Previous Prop 8 Defendant Wants Out: I’m Scared Of Gay Retribution
Next The End Of Giuliani?