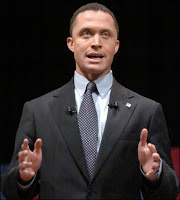 After charges of flip-flopping and carpetbagging rained down on him yesterday, today former Tennessee Rep. Harold Ford (D) took to the op-ed pages of the New York Post to bolster his cause to unseat Sen. Kirsten Gillibrand.

I am pro-choice — have always been since I entered politics almost 15 years ago. My cumulative grade with NARAL during 10 years in Congress was right at 80 percent. Any assertions to the contrary are false. I remain committed to promoting gun safety and handgun control, and I look forward to working with Mayor Bloomberg and Newark Mayor Corey Booker and their coalition to reduce handgun violence in cities across America. Despite what critics say about me, I enjoyed uninterrupted support from organized labor throughout my time in Congress. And from the moment I arrived in Congress, I supported civil unions. Like New York’s senior senator, after listening to and participating in the national conversation about full equality and fairness, I support same-sex marriage.