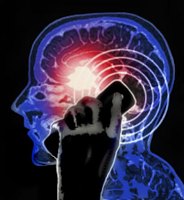 GQ has published an extensive article investigating the possible link between cell phone use and brain cancer, an issue under heavy study in Europe, but not so much in the U.S., where some have claimed such research has been blocked by the phone industry. The article was written with “research support provided by the Investigative Fund of the Nation Institute,” an outfit funded in part by the leftist mag The Nation, and the Lannan Foundation, a progressive writers group.

You’ll have to get deep into the GQ article for the scientific specifics about microwaves and their possible link to brain tumors, but the article opens with this anecdotal account from a Wall Street banker:

He explained that the tumor was located just behind his right ear and was not immediately fatal—the five-year survival rate is about 70 percent. He was 35 years old at the time of his diagnosis and immediately suspected it was the result of his intense cell-phone usage. “Not for nothing,” he said, “but in investment banking we’ve been using cell phones since 1992, back when they were the Gordon-Gekko-on-the-beach kind of phone.” When Jim asked his neurosurgeon, who was on the staff of a major medical center in Manhattan, about the possibility of a cell-phone-induced tumor, the doctor responded that in fact he was seeing more and more of such cases—young, relatively healthy businessmen who had long used their phones obsessively. He said he believed the industry had discredited studies showing there is a risk from cell phones. “I got a sense that he was pissed off,” Jim told me. A handful of Jim’s colleagues had already died from brain cancer; the more reports he encountered of young finance guys developing tumors, the more certain he felt that it wasn’t a coincidence. “I knew four or five people just at my firm who got tumors,” Jim says. “Each time, people ask the question. I hear it in the hallways.”