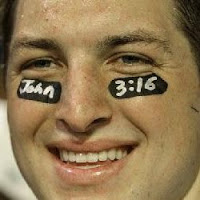 Focus On The Family has purchased ad time during next month’s Super Bowl, when University of Florida quarterback Tim Tebow and his mother will shill for the hate group. Tebow is known for placing Bible verses into the black stripes under his eyes during games. (He’s home schooled!) It’s expected that the Tebows will give a personal message against abortion in the ad. A 30-second spot will cost at least $2.5M, a curious expenditure for the cash-strapped FOTF, who laid off more than 275 employees in the last year. A spokesman claims the money is coming from ad-specific donations, not the general fund.