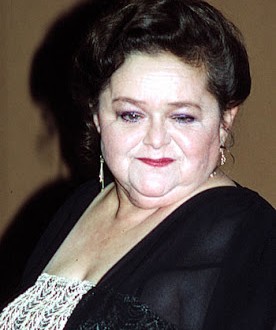 Zelda Rubinstein, the tiny actress known for her iconic role in Poltergeist and beloved by gays for early work in AIDS activism, has died in Los Angeles at the age of 76.

Rubinstein, who also appeared as the mother figure in a high-profile mid-1980s public awareness campaign in Los Angeles aimed at stopping the spread of AIDS, died today of natural causes at Barlow Respiratory Hospital in Los Angeles, said Eric Stevens, her agent. Rubinstein was hospitalized at Cedars-Sinai Medical Center about two months ago after suffering a mild heart attack, Stevens said. “She had ongoing health issues and unfortunately they finally overtook her,” he said. A medical lab technician before launching her acting career in her 40s, the 4-foot-3 Rubinstein made her film debut as one of the little people in the 1981 Chevy Chase comedy “Under the Rainbow.” Among her other credits are the movies “Frances,” “Sixteen Candles,” “Teen Witch,” “Anguish” and “Southland Tales” and the TV series “Picket Fences” on which she was a regular.

Older JMG readers may remember Zelda’s famous and groundbreaking HIV prevention billboard campaign in Los Angeles, which proclaimed that “L.A. CARES Like A Mother.” From a 1985 Los Angeles Times article:

Some city buses will begin carrying advertisements next month asking sex partners to “play safely” as a way to avoid being stricken by acquired immune deficiency syndrome (AIDS), despite fears that the ads will offend riders. The ads will appear in 80 Rapid Transit District buses beginning in June. The RTD originally refused to carry the ads but changed its mind after months of negotiations with L.A. CARES, the state-funded group sponsoring the ads. The ads feature an actress portraying a mother wearing an apron and holding a wooden spoon while saying, “Play Safely.” Below is a caption which reads, “L.A. CARES . . . like a mother.”

I believe Zelda’s ad campaign was the first such publicly funded safe sex ad campaign. Can anybody verify that? Below is the Advocate’s Neil Broverman’s interview with Zelda made last last year.

Previous Tweet Of The Day
Next ABC Cancels Ugly Betty