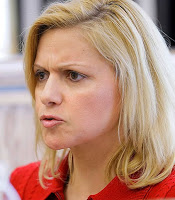 She was OK with fucking her way to the top with her clearly gay husband, including having three-ways with him. But Dina Matos McGreevey does not support same-sex marriage. Because that’s against God.

“I was raised a Catholic. I grew up in the church, so I believe in traditional marriage between a man and a woman,” Matos added. McGreevey, who left office three months after disclosing his sexual orientation, is in a gay relationship and has said he would marry his partner if possible. A bill that would have legalized gay marriage was defeated, 20-14, in the state Senate last Thursday, ending efforts to secure passage prior to the inauguration of Gov.-elect Chris Christie, a gay marriage opponent, next Tuesday. Matos, 43, has not remarried but acknowledged Wednesday she is dating.