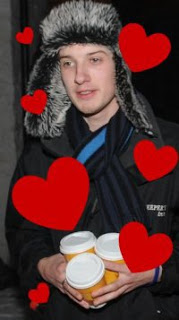 It just gets juicier. The most famous homophobe in the UK not only cheated on her husband with then 19 year-old Kirk McCambley, now it’s alleged that she took thousands in kickbacks from the boy in return for funneling government money into his new restaurant.

The Northern Ireland MP broke parliamentary rules by not declaring her interest in the business, despite sitting on the council which awarded the money to Kirk McCambley, it was claimed. According to a BBC Spotlight programme broadcast last night, Mrs Robinson, 60, also demanded a £5,000 kickback from Mr McCambley for helping arrange the transaction. Today, her husband Peter Robinson, who is Northern Ireland’s first minister, denied he had done anything wrong. It was claimed he knew about the solicitation and had demanded the return of the money, but had not alerted parliamentary authorities. Mr McCambley runs the the Lock Keepers Inn, a cafe in Lagan Valley regional park in south Belfast. The building in which the cafe is situated was built by Castlereagh Borough Council, on which Mrs Robinson sits as a councilor.

Meanwhile Robinson’s young lover, now christened “Kirk Diggler” in reference to Mark Wahlberg’s horse-cocked character in Boogie Nights, has become an instant folk hero in the UK, becoming the subject of numerous Facebook fan pages, most of which were created to mock Robinson. British gay glossy Attitude Magazine is offering young Kirk the cover of their next issue, calling him “incredibly hot.” Additionally, a campaign is underway to make the 1968 Simon & Garfunkel classic, Mrs. Robinson, the #1 song on this week’s UK pop chart, aided by a radio request effort and an iTunes download promotion. Nobody beats the Brits when it comes to schadenfreude. Nobody.