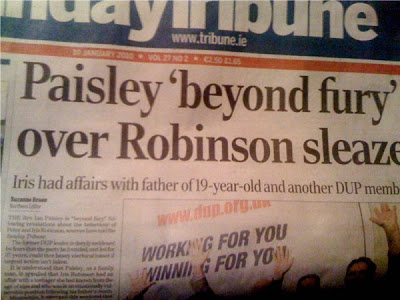 CougarGate: Iris Did Kirk’s DAD Too, Scandal May Bring Down Government Can it possibly get any sleazier? Iris Robinson, the UK’s most infamous homophobe, not only fucked 19 year-old Kirk McCambley, she fucked his father too! The scandal now threatens to bring down Robinson’s husband Peter, the First Minister of Northern Ireland, and the entire coalition government he heads.

The sex scandal that has transfixed Northern Ireland in recent days has a cinematic echo: a 60-year-old Mrs. Robinson who was caught in an affair with a man who was 19 at the time, and is now at the center of a scandal that threatens to bring down the power-sharing government that has steered the province out of 30 years of sectarian bloodshed. Predictably, local newspaper headline writers and bloggers have resorted to catchphrases like “Here’s to you, Mrs. Robinson,” borrowed from the song in the 1967 film “The Graduate.” But the storyline unfolding in Belfast has a more serious edge because this Mrs. Robinson, Iris, a stridently moralistic lawmaker, is the wife of the province’s unionist first minister, Peter Robinson, who is now struggling to keep his job. The revelations come at a critical time, when the mostly Protestant unionists and mostly Catholic republicans are in increasingly bitter discussions about how to put in place one of the last and most difficult pieces of the United States-brokered power-sharing agreement: the transfer of police and justice powers in the province from British officials to the unity government.

We may be seeing the first ever incidence of an entire government brought down by homophobia. The investigation into Iris Robinson’s past would surely not have happened had she not gone on national radio to declare that gays were perverted abominations.

UPDATE: The Times Online reports that when her affair with 19 year-old Kirk ended, she demanded that he repay the entire £45,000. Half of that money was to go to her evangelical church.

When the affair ended that autumn, Robinson demanded the money be paid back to her personally from the fledgling business, forcing McCambley to sell half of it. “It seems cruel but I am not going to soften until he has paid back the £45,000 and he has got until Christmas,” she texted. She also lamented her affair with a text that read: “Everything is a reminder wherever I go. My home, my church, my car, my music and of course the roads we drove.” As the deadline for repayment approached, she stipulated that there should be two cheques, one made out to her and one to the Free Methodist Church she attended, where the minister was Pat Herron, her sister-in-law. She also asked that one third of the profits of the cafe be paid into church funds. Black, the former clergyman who revealed the texts, was asked to assist. Disturbed at being asked to act as a fixer in the affair, he said: “Where is God in all this?” Robinson explained that she had proposed the payment to the church as “a gesture of giving something back. I never intended this to be a buy-off to God. It was an honest and honourable decision”. Herron says that her church never received any money.

The BBC is now reporting that Iris Robinson has been hospitalized for “acute psychiatric treatment.” On Twitter some are claiming that she has been “sectioned,” the British term for compulsory confinement due to mental illness.

Previous Hundreds Rally At SD Manchester Hyatt
Next Here’s To You, Mrs. Robinson