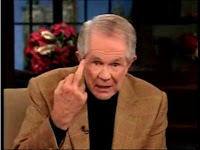 CBN: Pat Robertson Didn’t Say That And What He Said Is True Anyway You’d think that after all the outrage that rained down on Pat Robertson from the left AND the right (even the Freepers were pissed), we’d see some kind of waffly, half-assed, non-apology apology from the Christian Broadcast Network. Not so.

On today’s The 700 Club, during a segment about the devastation, suffering and humanitarian effort that is needed in Haiti, Dr. Robertson also spoke about Haiti’s history. His comments were based on the widely-discussed 1791 slave rebellion led by Boukman Dutty at Bois Caiman, where the slaves allegedly made a famous pact with the devil in exchange for victory over the French. This history, combined with the horrible state of the country, has led countless scholars and religious figures over the centuries to believe the country is cursed. Dr. Robertson never stated that the earthquake was God’s wrath. If you watch the entire video segment, Dr. Robertson’s compassion for the people of Haiti is clear. He called for prayer for them. His humanitarian arm has been working to help thousands of people in Haiti over the last year, and they are currently launching a major relief and recovery effort to help the victims of this disaster. They have sent a shipment of millions of dollars worth of medications that is now in Haiti, and their disaster team leaders are expected to arrive tomorrow and begin operations to ease the suffering.