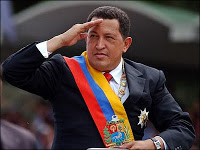 According to Venezuela president Hugo Chavez, it was the U.S. that totally wiped out Port Au Prince with its secret earthquake machine.

Citing an alleged report from Russia’s Northern Fleet, the Venezuelan strongman’s state mouthpiece ViVe TV shot out a press release saying the 7.0 magnitude Haiti quake was caused by a U.S. test of an experimental shockwave system that can also create “weather anomalies to cause floods, droughts and hurricanes.” The station’s Web site added that the U.S. government’s HAARP program, an atmospheric research facility in Alaska (and frequent subject of conspiracy theories), was also to blame for a Jan. 9 quake in Eureka, Calif., and may have been behind the 7.8-magnitude quake in China that killed nearly 90,000 people in 2008. What’s more, the site says, the cataclysmic ruin in Haiti was only a test run for much bigger game: the coming showdown with Iran. The ultimate goal of the test attack in Haiti, the report reads, is the United States’ “planned destruction of Iran through a series of earthquakes designed to topple the current Islamic regime.”