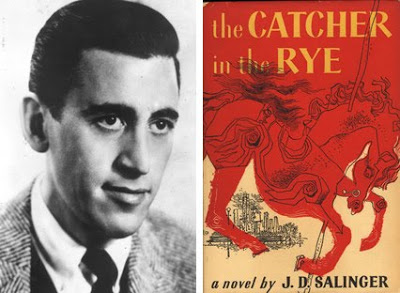 Famously reclusive and iconic novelist J.D. Salinger died in his New Hampshire home yesterday at the age of 91.

J. D. Salinger, who was thought at one time to be the most important American writer to emerge since World War II but who then turned his back on success and adulation, becoming the Garbo of letters, famous for not wanting to be famous, died Wednesday at his home in Cornish, N.H., where he had lived in seclusion for more than 50 years. He was 91. Mr. Salinger’s literary representative, Harold Ober Associates, announced the death, saying it was of natural causes. “Despite having broken his hip in May,” the agency said, “his health had been excellent until a rather sudden decline after the new year. He was not in any pain before or at the time of his death.”

I am 100% certain that the first time I ever saw the word “fuck” in print, it was in my hippie aunt’s dogeared copy of Catcher In The Rye, which my horrified mother found me poring over during a summer of 1968 visit to NYC. I was only eight and while a precocious reader, I recall having had only a vague yet distinctly terrifying idea of what the word meant. Thanks to my Marine father, for whom swearing was a competitive sport, I had known it as a curse word, but unlike his usual litany of Catholic blasphemy, “fuck” seemed reserved for usage around his fellow jarheads only. I knew it was very unlike the other swears, but how, exactly, I wasn’t really sure. Until that day with Catcher In The Rye.

Previous And Then The Robot Groundhog Became Self-Aware And Mankind Was Doomed
Next Maggie Knows Prop 8 Is Lost (And It’s All Because Of Violent Homofascists!)