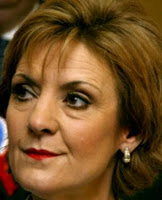 Days after announcing that she was stepping down due to a lifelong battle with depression, anti-gay Northern Ireland MP Iris Robinson has revealed that she was committing adultery last year. She was cheating on her husband at the same time she was facing hate crimes charges for calling gays abominations on BBC Radio!

The wife of Northern Ireland’s first minister, Peter Robinson, has said she tried to kill herself while suffering depression after she had an affair. Mr Robinson, leader of the DUP, said they would try to save their marriage. Iris Robinson announced in December she was stepping down from politics due to ill health. The couple were married in 1970 and have three grown-up children. Mr Robinson who has been first minister since June 2008, said he will continue in his job. In an interview on Wednesday, he said he first learned of the affair on March 1 2009, the night Mrs Robinson attempted suicide. Mr Robinson, who appeared close to tears, said he had been “deeply hurt” and that his immediate impulse had been to walk away from the marriage.

See? The UK isn’t that different than America. The guilty dog barks the loudest there too.

Previous And After This, Chuck E. Cheese
Next HomoQuotable – Simon Doonan