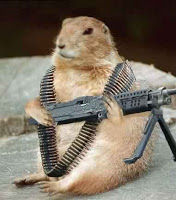 You know I can never resist a PETA story.

PETA wants to take Punxsutawney Phil away from Gobbler’s Knob and give the little guy a dignified retirement at an animal sanctuary. In his place, you guessed it: A robot groundhog. Gemma Vaughan, PETA’s animals in entertainment specialist, fired off a letter to groundhog club president William Deeley this week, asking for his promise that the group will forgo the use of real rodents in future Groundhog Day celebrations. Little Phil, Vaughan wrote, is a pretty unhappy fellow, “forced to be on display year round at the local library and is denied the ability to prepare for and enter yearly hibernation.” Groundhogs are typically shy creatures, Vaughan goes on to explain, and they can become easily upset when confronted by throngs of people, loud noises and camera flashes.

Hopefully they aren’t already sold out at the Robot Groundhog Outlet!