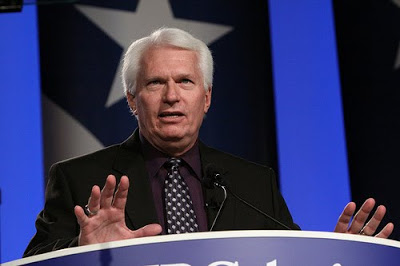 American Family Association radio host Bryan Fischer has called for sending homosexuals to prison for forced reparative therapy, a move he says is sanctioned by the Bible. Below, he responds to an email from a complaining listener.

If you believe that what drug abusers need is to go into an effective detox program, then we should likewise put active homosexuals through an effective reparative therapy program. Secondly, I’m afraid you’re simply wrong about the Bible’s perspective on the law and homosexuality. Paul lists quite explicitly in 1 Timothy 1:8-11 the actions and behaviors that are the proper concern of the law:

“Now we know that the law is good, if one uses it lawfully, understanding this, that the law is not laid down for the just but for the lawless and disobedient, for the ungodly and sinners, for the unholy and profane, for those who strike their fathers and mothers, for murderers, the sexually immoral, men who practice homosexuality, enslavers, liars, perjurers, and whatever else is contrary to sound doctrine…”

The bottom line here is that, biblically, those “who practice homosexuality” should come under the purview of the law just as much as those who take people captive in order to sell them into slavery. You express a belief in the Scriptures, and I trust your confidence in Scripture is not selective. If you believe all Scripture is inspired, then you are compelled to accept that legal sanctions may appropriately be applied to those who engage in homosexual behavior.

In November, Fischer called for banning all Muslims from the U.S. military. In addition to his radio show for the American Family Association, Fischer is the executive director of the Idaho Family Alliance.

Remember folks, the Christianist right is not about hatred and bigotry. It’s about the gentle redemptive love of Jesus, forced upon you at the barrel of a gun in prison as they beat the gay out of you.