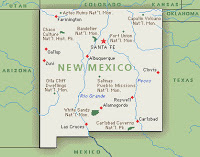 Feeling left out of the nationwide cavalcade of hate, a New Mexico lawmaker has pre-filed a bill which would amend that state constitution to ban same-sex marriage.

Senator William Sharer, a Republican from Farmington, has pre-filed legislation that would define marriage as a heterosexual union in the New Mexico Constitution. The bill proposes adding the following text to the constitution: “Marriage in this state shall consist only of the union of one man and one woman.” Voter approval is needed to alter the state’s constitution. Similar attempts in the last two sessions of the Legislature have died in committee. In previous legislative sessions, the New Mexico House has approved bills recognizing gay and lesbian unions as domestic partnerships, but the more conservative Senate rejected the measures. In this year’s session, the bill failed by eight votes.