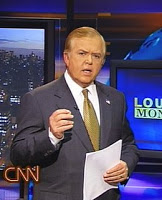 Who Are You And What Have You Done With The REAL Lou Dobbs? Just-resigned CNN anchor Lou Dobbs, who endeared himself to the right-wing with his regular rants against the brown hordes pouring across our southern border, says he’s had a change of heart and now supports amnesty for undocumented residents.

Resentment has been burbling across the wingnut blogosphere ever since Dobbs told Spanish-language network Telemundo late last month that he wants a “pathway to legalize the illegals.” Yesterday the American Family Association’s OneNewsNow site reported that Dobbs has now lost the endorsement of a major anti-immigrant group that had been urging him to run for president.

William Gheen, president of ALIPAC, explains why the organization is appalled by his words. “Lou Dobbs went on Telemundo Network on November 20th, and the full copy of the interview we got had him talking about a form of amnesty or path to citizenship for illegal aliens on several occasions,” Gheen explains. “He also apologized for not speaking Spanish to the audience and a bunch of other stuff that we saw as surrender and capitulation, especially considering that the La Raza pro-amnesty groups are now celebrating his departure from CNN. He also went on to say he doesn’t support deportation. He didn’t say he didn’t support mass deportations, he said he doesn’t support deportation at all.”

Has Dobbs really changed? Or is this just a transparently insincere ploy to move him up on the list of 2012 contenders?